Maid, whether you’re reading the novel by Stephanie Land or watching the Netflix adaptation, is a captivating story about a mother and her will to survive. Every turned page or every second spent watching Maid, I felt like I was learning about the poverty systems in America and the systems that keep those in poverty there. This story is that of domestic abuse, systematic poverty, America’s class divide, hard grueling work, single parenting and so much more. All in all, it’s a lesson that you can dig yourself out of any hole, no matter how deep and how devastating. 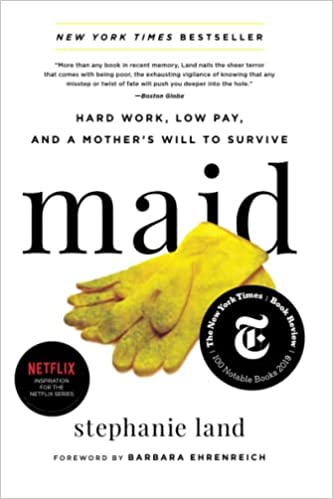 Obviously, like most other adaptations, Maid: Hard Work, Low Pay and a Mother’s Will to Survive came out first. It was published in 2019, and has since become critically acclaimed, and is a New York Times bestseller. The book follows the real story of Stephanie Land and her daughter Mia after Stephanie leaves an abusive relationship. As a single mother with very little to fall back on, Stephanie must embark on making a living on her own. In this journey, she faces judgment from absolute strangers for being on government assistance, like someone yelling “you’re welcome” at her in line at the grocery store for using food stamps, and having her bosses make fun of others in similar situations in front of her face. Maid makes you think hard about your privileges and everything you’ve been handed in life and really reflect on what you’ve done to deserve them, if anything at all.

The book was almost grueling to read, in the best way possible. It doesn’t let up, much like Stephanie’s journey didn’t either. The only thing keeping you at bay is the beautiful moments shared between Stephanie and her daughter Mia, like hiking in the woods, sledding down icy hills, cuddling in bed and overall loving one another. Much like for Stephanie, the only thing getting you through the book is the love between the two. Even when they get in a car accident, or there is black mold growing on their windowsill, or when Stephanie has to work overtime to afford something, the love holds them together and gets them through it all.

Maid, the on-screen adaptation of the book, is a fictional version of the story told in the novel. Instead of following Stephanie and Mia, we follow Alex, and her daughter Maddy. While the general premise is the same, slight differences fill the screen and bring in even more topics and themes that were only danced around in the novel. We get a deeper view of Alex’s life as a domestic abuse victim, and what it is like for other victims of the same nature. At her domestic abuse housing, Alex is told that it usually takes victims seven attempts before they truly escape.

This adaptation also takes time to show Alex’s journey in realizing she’s a victim at all. At the beginning of the show, Alex clearly believes that being a “victim” can only be physical, and the emotional abuse she was put through doesn’t matter in the same way. Thankfully, by the end of the show, Alex registers that she is a victim and that emotional abuse is not any lesser than any other form.

Personally, the adaptation touched on more topics than the novel was able to, but both of them drove home the overarching message – that the American systems are built in a way to keep those in poverty in poverty.

Stephanie (and Alex) attempt to find childcare options so that they can work and provide for their daughters, and are hit with the need for paystubs. That’s right. You need paystubs to get childcare so that you can work. Along with this single conundrum, there are so many more situations that are frustrating and painful to learn about. Every time she makes too much money, her benefits get stripped away and once again, she can’t afford the things she needs to survive. There is no reward system for pulling yourself out of poverty, you only get punished for making more money and doing what you’re “supposed to.” Those on government benefits are called “free-loaders” while busting their asses to do anything they can to stay afloat. Almost every page I read or minute I watched of Maid, I was frustrated and heartbroken.

If you haven’t already watched and read Maid, you absolutely need to. This story will open your eyes and will (hopefully) change the way you see the world. Never take what you have for granted. This is a story of just one mother trying her best, but in 2020, there were 37.2 million Americans reported in poverty. This is a single story in the ocean of Americans who struggle in similar ways. Change the way you live, the way you see others, the incoherent and awful thoughts you might think when you see someone using food stamps or WIC coupons in front of you in line, or when you see a homeless person on a street corner. Don’t roll your eyes. Don’t say they should have done more or should have done better. Don’t pass judgment on situations you don’t understand. We need to change.

Have you read Maid Stephanie Land Book or the Maid (Netflix) show? Let us know in the comment section below!

We use cookies on our website to give you the most relevant experience by remembering your preferences and repeat visits. By clicking “Accept”, you consent to the use of ALL the cookies.
.
Cookie SettingsRead MoreAccept
Manage consent

This website uses cookies to improve your experience while you navigate through the website. Out of these, the cookies that are categorized as necessary are stored on your browser as they are essential for the working of basic functionalities of the website. We also use third-party cookies that help us analyze and understand how you use this website. These cookies will be stored in your browser only with your consent. You also have the option to opt-out of these cookies. But opting out of some of these cookies may affect your browsing experience.
Necessary Always Enabled
Necessary cookies are absolutely essential for the website to function properly. These cookies ensure basic functionalities and security features of the website, anonymously.
Functional
Functional cookies help to perform certain functionalities like sharing the content of the website on social media platforms, collect feedbacks, and other third-party features.
Performance
Performance cookies are used to understand and analyze the key performance indexes of the website which helps in delivering a better user experience for the visitors.
Analytics
Analytical cookies are used to understand how visitors interact with the website. These cookies help provide information on metrics the number of visitors, bounce rate, traffic source, etc.
Advertisement
Advertisement cookies are used to provide visitors with relevant ads and marketing campaigns. These cookies track visitors across websites and collect information to provide customized ads.
Others
Other uncategorized cookies are those that are being analyzed and have not been classified into a category as yet.
SAVE & ACCEPT
Loading Comments...
%d bloggers like this: